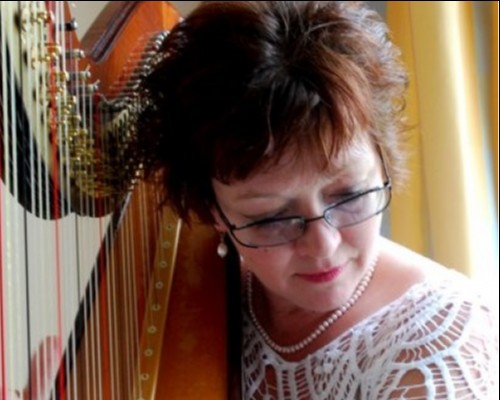 Morwen began studying the harp aged 9 and following success at the Gwyl Gerdd Dant and the National Eisteddfod continued her studies at the Guildhall School of Music and Drama, graduating in 1988. She then worked as a freelance harpist, performing at many functions for members of the Royal family including the late HRH Queen Elizabeth, The Queen Mother: Diana, Princess of Wales; Prince Philip; the Duke and Duchess of Gloucester and the Duke and Duchess of Kent.
She also performed at functions within the city of London attended by five different Lord Mayors, Baroness Thatcher, John Major and other dignitaries. Morwen toured the UK and performed in the West End with a number of musicals including The Sound of Music, Phantom of the Opera, Some Like it Hot, Sunday in the Park with George and Valentine’s Day and played with various orchestras, opera companies and ballet companies.
As a soloist, she has performed the Mozart Flute and Harp concerto and the Handel Harp concerto and has given recitals and concert appearances in England and Wales. Morwen returned to study at the University of Wales, Cardiff and gained a First Class Honours degree in 1996 after which she began her teaching career, firstly in Wrexham and then joined Howell’s School in 1998 where she held the post of Head of Music and Senior Mistress until the schools closure in August 2013.
Currently Morwen is teaching harp for Canolfan Gerdd William Matthias in Denbigh and for a number of schools in Wrexham. She has a growing number of private harp and piano pupils and has recently begun as accompanist to Cor Cytgan led by Ann Davies. She also accompanies Cerdd Dant for the local and regional Urdd Eisteddfod and performs at functions, weddings and concerts.