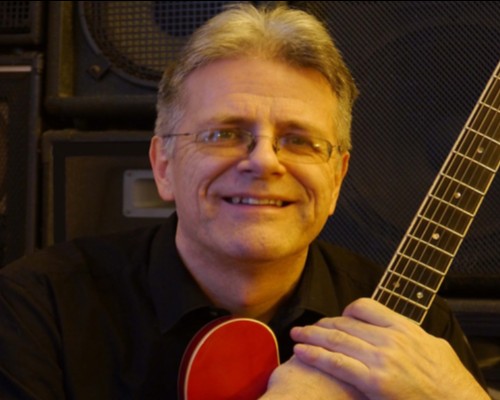 Neil Browning’s musical interests and teaching activities are extremely varied. As CGWM’s main guitar tutor for over ten years, he teaches all styles from classical to rock, as well as electric guitar groups for Galeri’s Sbarc! project.
He is also in demand in the traditional music scene as a course tutor and workshop leader. Neil has written music for television and played in all kinds of live shows, including touring theatre productions and gigs in Europe and the U.S..
He taught on a variety of music and performing arts courses at Yale F.E. College in Wrexham, where he also gained his P.G.C.E. Most recently, Neil has played and recorded with Cajuns Denbo (accordion), Cardiff-based Rock-roots band Bluehorses (guitar) and Billy Thompson Gypsy Style (guitar), as well as his genre-defying band Never Mind the Bocs, who released their second album in 2014.