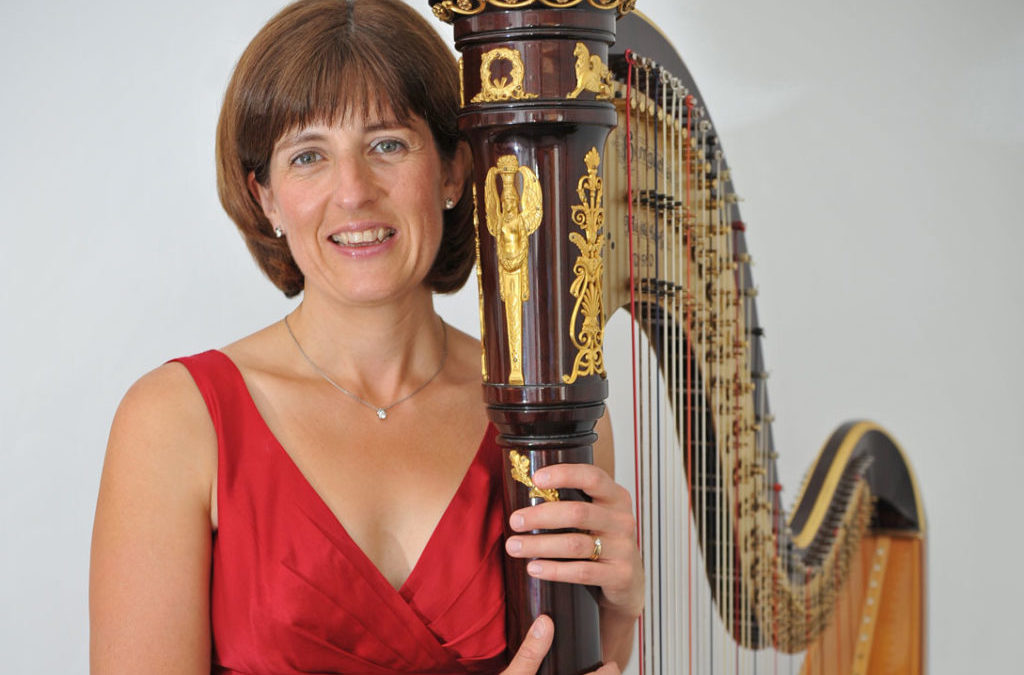 Catrin Morris Jones comes originally from Bangor and after twenty years of living and working in London she has now moved to live in Pwllheli. After completing a Performers’ Course at the Guildhall School of Music and Drama, where she studied with David Watkins, she began her Postgraduate Studies at the Royal Academy of Music with Skaila Kanga, where she was awarded the Renata Scheffel-Stein Prize for Harp. In May 2014 she was elected as an Associate of the Royal Academy. This honour is given to the prominent alumni of the Academy who have contributed to their chosen field.
Teaching children and adults to play the harp has been an important part of Catrin’s career and she has taught many private students over the years in addition to teaching at the London Welsh School, St Albans High School, Watford Music Centre, the City of London School for Girls, St Pauls School for Girls, and Beechwood Park School, Hertfordshire. Catrin has performed in numerous West End shows including Oliver!, The King and I, Notré Dame de Paris, The Producers, My Fair Lady, Napoleon, The Secret Garden (The Royal Shakespeare Company) and South Pacific (Royal National Theatre).
Catrin is currently a deputy on the Phantom of the Opera. Catrin has performed with many prominent orchestras, including: The Philharmonia, Royal Philharmonic and Royal Philharmonic Concert Orchestras, the Hallé Orchestra, the Royal Scottish National Orchestra, Ensemble 10/10 (Royal Liverpool Philharmonic’s contemporary ensemble), Trondheim Symphony Orchestra, the Royal Opera House Orchestra, Glyndebourne Touring Orchestra, English Touring Opera, Garsington Opera Orchestra, the Opera São Carlos in Lisbon, Portugal, London City Ballet, Moscow City Ballet and the Northern Ballet Company.
Recital performances have included Mozart’s Concerto for Flute and Harp in the Barbican Hall, Debussy’s Dance Sacrée et Dance Profane at the Minehead Festival and a world Premiere performance of Adam Gorb’s Harps of Gold, for harp quintet, at the Wigmore Hall. During her last Postgraduate year at the Royal Academy of Music Catrin was the only British musician to successfully audition for a place in the Schleswig-Holstein Festival Orchestra, with whom she toured Germany, Spain, Austria, Italy and Denmark, working with conductors such as Valery Gergiev, Marin Alsop and the late Sir George Solti.
Catrin has performed at many prestigious venues including Banqueting House, Westminster Parliament, the Victoria & Albert Museum, Kensington Palace, the National Portrait Gallery, The Royal Society in Pall Mall, the Tower of London and Tower Bridge as well as some of London’s top hotels and many Livery Halls in the City of London. She has also dressed up at as witch and performed on platform 9¾ at Kings Cross Station for the launch of the first Harry Potter DVD! Catrin is the harpist of the Arabesque flute and harp duo, has a private teaching practice at home and started teaching the harp at Canolfan Gerdd William Mathias in 2015.