A musical group that’s providing a lockdown lifeline for people in Gwynedd with and without learning disabilities has launched a new video with the help of some star names.

Performing with the members, tutors and volunteers involved in the Canfod y Gân (Discovering Music) project were Geraint Lovgreen, from Caernarfon, Dewi Pws who lives in Nefyn on the Llŷn Peninsula, along with Rhys Parry who plays guitar in Bryn Fôn’s popular band.

The video was produced using audio and video from members improvising musically which were recorded by family members or support workers on phones and tablets.

The music track was then mixed and edited by Edwin Humphreys, from Pwllheli, a tutor with the project and the video was created by Gwydion Davies, from Canolfan Gerdd William Mathias Music Centre (CGWM).

The Coronavirus pandemic hasn’t stopped the group from making music despite the fact they can no longer meet up for their fortnightly sessions in Caernarfon, Pwllheli and Harlech.

Led by CGWM and working in partnership with Gwynedd Council’s Learning Disability Team, they have put together a video of members performing the national anthem of Wales as well as the group’s own unique signature piece which they’re hoping will go viral on social media.

The project, which is funded by a three-year grant from Spirit of 2012, the London 2012 legacy fund, gives disabled and non-disabled people the opportunity to come together as equals to create music with the aim of improving mental health and wellbeing.

Matthew Murray, 25, from Bangor, a member of the Caernarfon group, loves being part of the group.

He said “I like to rap and have been writing my own stuff for a long time. My social worker was looking for a music project I could get involved with and that’s how I got to be with Canfod y Gân.

“I volunteer in a cafe at the leisure center in Caernarfon on Mondays’ or until the virus I did. So, I started going to Canfod y Gân after my shift in the cafe. I love working with other people and like pretty much everything about the group.

“I’ve met a friend there who volunteers and we are going to work together on some raps and we plan to record some of my lyrics. That’s really exciting.

“I write what comes to mind. I write about things that are going on in my life, about family issues and things like that.”

He added: “I enjoyed being involved with the video that we have done. I wrote lyrics about the hard times and how we are coping with the pandemic and friends and family.”

Terry Tuffrey, 20, from Blaenau Ffestiniog, is a member of the Harlech group and is a student at  Coleg Meirion Dwyfor in Dolgellau where he is studying independent living skills.

He said: “I usually go every other Tuesday night and like it a lot.  I’m a very sociable person and I get to meet friends from Harlech and the area. It’s always good fun and I learn new singing skills.

“They often have new instruments to try but I prefer to sing although I can play tambourines and wind chimes things like that. I started going when I was 18 and I’m just 20 now. The singing we do I like because I get to sing the sort of things I like.

He added: “The virus has been horrible and has stopped the Canfod y Gân sessions. As a family we are just following the guidelines and hoping for the best, that’s all you can do.

“But I’m looking forward to going back and meeting everyone again.”

According to project manager Mared Gwyn-Jones, the aim is to enable all members of the group to come together with professional music tutors and volunteers to create music as equals.

She said: “Spirit of 2012 awards grants for inclusive arts, sports and volunteering activities in communities that bring people together to improve their wellbeing which is exactly what Canfod y Gȃn does.

“The Coronavirus pandemic has put a stop to our fortnightly groups at all three locations and we have to accept that is likely to continue being the case for a considerable time.

“However, we have worked together to develop alternative means of working. Not being able to meet up and work together face to face was a massive blow to many of our members as well as the freelance music tutors who have been working on the project.

“Since having to suspend group meetings we have been keeping in touch with many of our members through regular phone calls and video recordings of favourite songs.

“This has been very important in keeping spirits up and to keep the project going.  “Our Caernarfon group has taken this remote meeting a step further with their own project.

“The idea started when we received two clips of group member Llŷr Griffith, from Llanllyfni,  playing the national anthem on keyboards and then our group’s signature song which has been composed, both music and lyrics, by members working together.”

“Edwin Humphreys was inspired to start something akin to a musical snowball. Using Llŷr’s clips, along with other tutors, members and volunteers, he created a track of this particular song.

“He has created an absolutely fantastic and inspiring track in his own recording studio from the clips group members sent him and Gwydion Davies has created a fantastic video to go along with the track.

“We now plan to replicate this project with our other groups and the process is now already underway with our Harlech and Pwllheli groups.”

Edwin, from Pwllheli, worked as a session musician for many years and retrained to become a psychiatric nurse.

He said: “Members recorded snippets on their phones and I’ve put those individual pieces together into one recording. Considering members had to record themselves on mobile phones or tablets they have done really well.

“I’m really pleased with what we have achieved together and hopefully the other two groups can now do something similar. I’m really looking forward to working with them.”

Fellow tutor Gwenan Gibbard, from Pwllheli, who’s an acclaimed harpist, says being involved with the scheme has proved to be an “absolute joy”.

She said: “The whole Canfod y Gân experience has been a privilege. It’s amazing as there is real talent out there and the best thing is everyone makes new friends. “Before Christmas we also had a couple of public performances which were really special. We performed music as a group and had some individual performances too.”

“On the video there is an eclectic mix of instruments. Several group members played guitars, there’s a cellist, a flautist, drummers and a glockenspiel and many different voices including Matthew Murray who does his own raps.”

CGWM director Meinir Llwyd Roberts said: “It has been wonderful to see Canfod y Gân develop during the 18months since we received the support from Spirit of 2012 and we’re delighted that we have been able to maintain contact with our members and ensure that music continues to be part of their lives during lockdown. 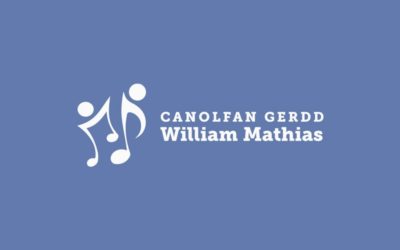 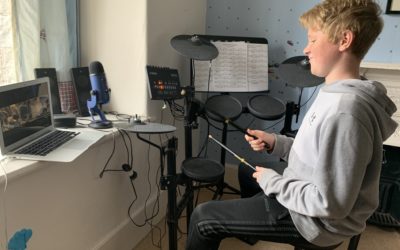 The doors to our Centres in Caernarfon, Denbigh and Ruthin are closed at present but with the cooperation of our fantastic team of tutors, the music continues. Here’s a taste of our online provision with more projects to come during the next few weeks….....