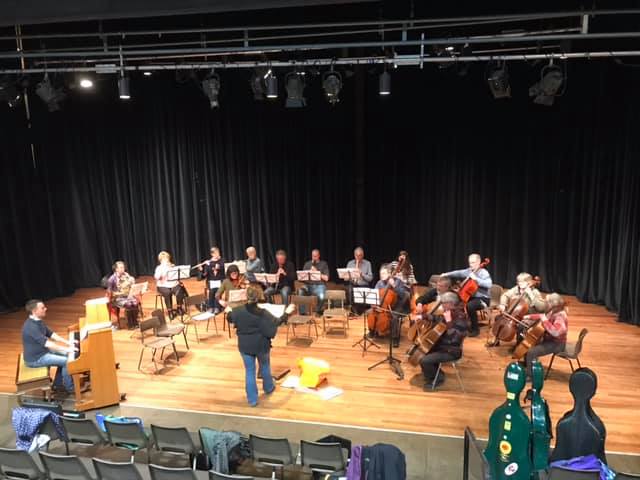 A new instrumental ensemble for adults held in Caernarfon, the Caernarfon Community Orchestra held its very first rehearsal on Tuesday the 5th of March.

Under the direction of the cellist, Nicki Pearce from Colwyn Bay and with Steven Evans, originally from Caernarfon as répetiteur the Community Orchestra meets on Tuesday evenings from 8:00pm – 9:15pm at Theatr Seilo in Caernarfon.

Sixteen members attended the first rehearsal with another 3 joining the second week.

It has been a dream for many years for Nicki Pearce, the orchestra leader to establish an orchestra for adults. Nicki said:

“I’m thrilled that I’ve finally been able to establish a community-based orchestra here in Caernarfon for adults.”

“There are so many adult learners who have been receiving one-to-one music tuition and this is a brilliant way for them to come together and have fun through music.”

“Also it is a great way for adults who have maybe not touched their instruments for years to pick it up again and have a go in a friendly and supportive environment.”

This new venture is organised by Canolfan Gerdd William Mathias which is based at Galeri Caernarfon and provides high quality music tuition, as well as organising a variety of community events throughout Wales.

Talking about the new orchestra, the director of Canolfan Gerdd William Mathias, Meinir Llwyd recognised the need for such an ensemble in Caernarfon:

“Nicki Pearce and I had been discussing for a while the possibility of establishing an orchestra that would provide opportunities for adults to come together, to socialise and enjoy creating music.

“Steven Evans who has recently started teaching piano at the Centre, also expressed an interest in being involved.”

“It’s interesting to see that the number of adults receiving one-to-one lessons at Canolfan Gerdd William Mathias has increased over recent years, which is very good news.”

“However, we also recognised the need to provide more opportunities for the adults receiving one-to-one lessons to also take part in group tuition as well as encouraging those who may have once played an instrument – perhaps whilst they were children to take up their instruments again.”

One member that enjoyed the first rehearsal was Gwyneth M Davies from Benllech that plays Bb Cornet.

“It is only recently that I have started having lessons, though I’ve been playing for around ten years.”

“I love music – I am a keen member of the LSW Band as well as Côr Hamdden Mathias – a women’s choir that meet on a Thursday afternoon in Caernarfon.”

“To be honest I was quite nervous before the first rehearsal – not quite sure what to expect.”

“But we’ve jelled as a Group and I’ve made new friends – we’re all very supportive of each other and everyone seems to be enjoying themselves.”

“The conductor Nicki Pearce is wonderful – she knows our different levels, and takes that into consideration when choosing pieces. It made me feel great that I could play the part I had.”

“I’ve also been encouraging my friends to join – they have an interest and are always asking how the rehearsals are going – I hope they’ll come and give it a go.”

One of the members who enjoyed the first rehearsal was Desmond Burton from Bangor. Desmond is an English language tutor at Bangor University and has previously taught English language overseas for almost 25 years. Desmond said:

“Regardless of your experience and level, if you think you’d enjoy playing music with others, come and join us in the Community Orchestra. Lots of us have never played in an orchestra before, so don’t be put off by the thought that everyone else will be better than you, because they probably won’t be!”

Nicki Pearce and Steven Evans were both very pleased to see such a variety of instruments. According to Steven:

“I did think that we might struggle to find woodwind and brass instrumentalists – but we had no trouble whatsoever – although we could do with some more violinists!”

Since the first rehearsal more members have now joined and a warm welcome awaits any other new members wishing to join the orchestra.

A new series of Caernarfon Community Orchestra will begin on the 9th of April.

To register and for more information members are encouraged to contact Canolfan Gerdd William Mathias (01286 685 230 / post@cgwm.org.uk).