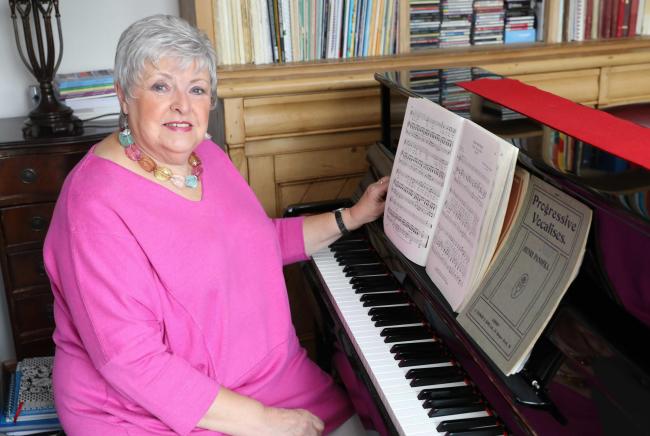 Mary has taught at the centre, which was founded in Caernarfon with support from the Arts Council of Wales, since its first day. The centre also has bases in Denbigh and Ruthin.

The concert will be held at the Galeri, in Caernarfon, on Saturday, September 7, when Mary will be joined by a galaxy of Welsh musical stars.

There will be performances by acclaimed harpist Elinor Bennett, who has been instrumental in the centre’s success, and flautist, Rhiannon Mathias, the daughter of the composer, Professor William Mathias, after whom the centre was named.

Despite enjoying a career that has taken her so some of the world’s most famous opera houses, Mary Lloyd-Davies, stayed close to her roots by tutoring vocal students at the centre.

She said: “I’ve been performing since around 1969 and have enjoyed a wonderful career. There have been some fabulous highlights and inevitably a few low points too.

“One particular highlight was performing at Milan’s La Scala Opera House in an opera entitled 1984 which is based on George Orwell’s famous book.

“I have also performed in Hansel and Gretel in San Francisco and Houston and in Strauss’ Elecktra at the Opéra Bastille in Paris.

“I made my Royal Opera House debut as the fortune teller in Arabella. I also spent 22 years with the Wales National Opera (WNO) doing lead roles in Fidelio, Macbeth, Elektra, Tosca, Ballo in Maschera, Tristan and Isolde.”

“My big break came in 1992. I was understudy for the lead role in the Richard Strauss opera Elektra. However, the lead became sick and I had to step in at very, very short notice.

“I was then offered the lead role in Elektra in the same production in 1995 for another WNO production and then stepped in at very short notice for the same role at Opéra Bastille in Paris for a different production. That was also a big career boost.”

She added: “I’ll be performing some William Mathias arranged traditional Welsh folk songs accompanied by harpist Elinor Bennett. I performed these folk songs at the memorial service for Yvonne Mathias, William Mathias’ widow, after being asked by their daughter, Rhiannon.

“The line-up for the concert is very impressive as along with Elinor Bennett we have harpist Glain Dafydd and pianist Glian Llwyd both of whom were Canolfan Gerdd William Mathias students.

“Also performing will be a former student who has become a successful singer songwriter, Casi Wyn ; cellist Gwydion Rhys and sopranos Tesni Jones and Lisa Dafydd, who were both students at the Canolfan Gerdd William Mathias’ satellite in Denbigh before going on to study at the Royal Northern College of Music.

“It’s going to be a wonderful evening of music and a great way to celebrate 20 years of Canolfan Gerdd William Mathias success.”

“It’s really important we have Canolfan Gerdd William Mathias in North Wales. There really is nowhere else in the region offering such a broad range of high quality music activities.. And this concert is really going to be a celebration of something quite special.”

According to the centre’s director, Meinir Llwyd Roberts, it’s a charity that offers a place with a real musical buzz to musicians of all ages.

She said: “We started 20 years ago offering one to one lessons and now have more than 40 freelance tutors. And as well as being based at Galeri Caernarfon we offer a facility at Denbigh and Ruthin with lessons two evenings a week. “But we do so much more than offer one to one tuition.. We have a pre-school music programme,, we work in care homes offering music to people living with dementia, we offer singing groups in rural communities and recently secured a substantial grant to develop our provision for adults who have learning disabilities. .

“The range of activities we are involved in has and continues to grow significantly. And many of our students have gone on to become very successful musicians in their own right.”

“It’s going to be a very special evening of music with something for everyone and I’d encourage music lovers to book their tickets now to save any disappointment.”

To book tickets please ring Galeri on 01286 685222 or go to the website www.galericaernarfon.com