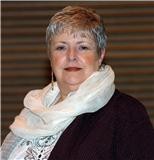 Mary Lloyd-Davies was born in Llanuwchllyn, North Wales. She studied singing at the Royal College of Music, London, where she gained many awards –and was twice finalist in the Kathleen Ferrier Memorial Prize. After graduating she went on to win the Miriam Licette Scholarship and studied in Paris with Pierre Bernac.
The earliest part of her career was spent performing in Concerts and Oratorio, where she travelled to Germany, South America, Canada, Holland and Israel. She has performed at all the major Concert Halls and Cathedrals throughout the U.K.
Mary began her Operatic career at Glyndebourne. Her solo career began as a Dramatic Soprano and in later years as a Mezzo Soprano. She has sung as a soloist for the Welsh Opera Company (Die Walkure, Tosca, Fidelio, Elektra, Macbeth, Turandot, Tristan und Isolde, Turn of the Screw, Der Fliegende Hollander, Hansel und Gretel. And also with the English Opera Company (Lohengrin, Isolde, Turn of the Screw, Barber of Seville, Traviata) in addition to various concert performances of operas. She sang the part of Ortlinde in Bayreuth during the period of it’s production (with James Levine) a part that she also sang in the Edinburgh Festival (with Antonio Pappano).
Overseas she has performed in Houston Grand Opera, San Fransisco Opera, the Bastille in Paris and Nurnberg.
Her Royal Opera House debut was as the Fortune Teller in Arabella.
She also performed the Prole Woman in “1984” [Lorin Maazel] there, a role she sang at La Scala, Milan and in March 2010, and Valencia,Spain in 2011. She was invited to sing in “1984-Symphonic Suite”at a concert with the Vienna Philharmonic, celebrating Maestro Lorin Maazel’s 80th birthday.
Mary teaches at the William Mathias Music Centre, Caernarfon, and delights in passing on her knowledge and guidance to young singers.