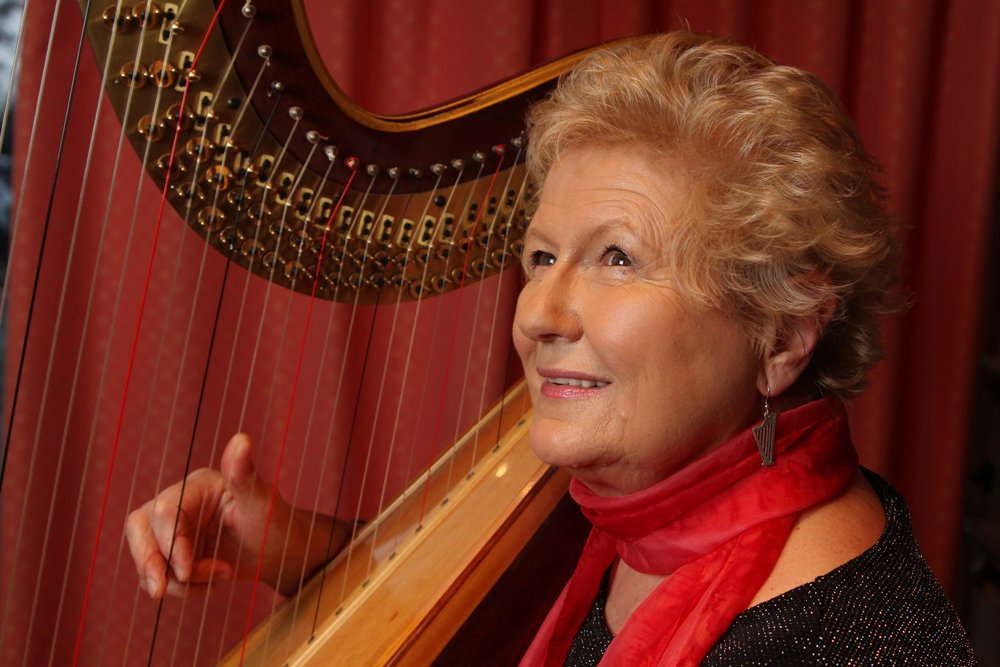 Elinor Bennett is one of Wales’ most distinguished musicians, and has been at the forefront of music performance and education for many years. She has travelled extensively giving concerts, recitals and masterclasses, and she is regarded as one of Britain’s most infuential harp teachers.
Although Elinor is recognised mainly as a leading professional harpist in the classical music repertoire, she has always sang and played the national music of Wales – from the early and traditional songs and harp repertoire, to new music of living composers – in her concerts, recordings and music festivals.
Steeped in the musical traditions of Wales, Elinor’s first degree was in Law at the University College of Wales, Aberystwyth, but her career changed course on winning a scholarship from the Countess of Munster Musical Trust, to study at the Royal Academy of Music, London under Dr. Osian Ellis.
Elinor played with all the major British orchestras, and worked with some of the world’s finest conductors and composers, including Sir John Barbirolli, Sir Adrian Boult, Sir Malcolm Sargeant, Sir Colin Davies, Erich Leinsdorf, Andre Previn and Benjamin Britten. Elinor has made many recordings, ranging from an acclaimed and definitive selection of 20th Century harp classics to collections of traditional music and Welsh folk songs on the Triple Harp.
In 1985 Elinor was awarded a Churchill Scholarship to travel to Australia to study Music Therapy and on her return, was instrumental in promoting its use for people and children with learning disabilities.
Many leading composers have written works for Elinor, including John Metcalf, Alun Hoddinott, Malcolm Williamson, Hilary Tann, Gareth Glyn, Hilary Tann, Rhian Samuel, Karl Jenkins. Her ex-pupils include Catrin Finch, Sioned Wiliams, (Principal Harpist of the BBC Symphony Orchestra) and many other distinguished harpists. In 1988, Elinor established Coleg Telyn Cymru (The Harp College of Wales) and currently organises many acclaimed residential courses for harpists of all ages.
In recent years, Elinor has been Visiting Professor of Harp at the Royal Academy of Music, and the Guildhall School of Music, London. Elinor was awarded the Royal Academy of Music’s Honorary Fellowship (FRAM) in 2006. Other Honorary Fellowships came from the Universities of Bangor, Cardiff and Aberystwyth, as well as the Royal Welsh College of Music and Drama, Cardiff, and an Honorary Doctorate in Music from the University of Wales.
She has been the driving force behind establishing Canolfan Gerdd William Mathias (Music Centre) in Caernarfon and was the Artistic Director from 2002 -2008. Elinor organised and directed the Wales International Harp Festival in 2006, 2010 and the next Festival in April 2014, when she will welcomne artists from many countries to play in Caernarfon.
She has been Special Guest and member of the Jury in Harp Festivals and competitions in Venice, Moscow, Szeged, (Hungary), Soka (Japan) Wellington (New Zealand) and Nantes (France), Schlitz (Germany), and Bangkok, and has played at the World Harp Congress and European and American Congresses on many occasions. She was the Artistic Director of the Tamnak Prathom Harp Festival in Bangkok in 2008 and again in 2012.
In 2002, Elinor was given the highest accolade by the National Eisteddfod of Wales, was the “Celtic Woman of the Year” in the USA, and was awarded the Glyndwr Prize by the Machynlleth Festival in 2003.