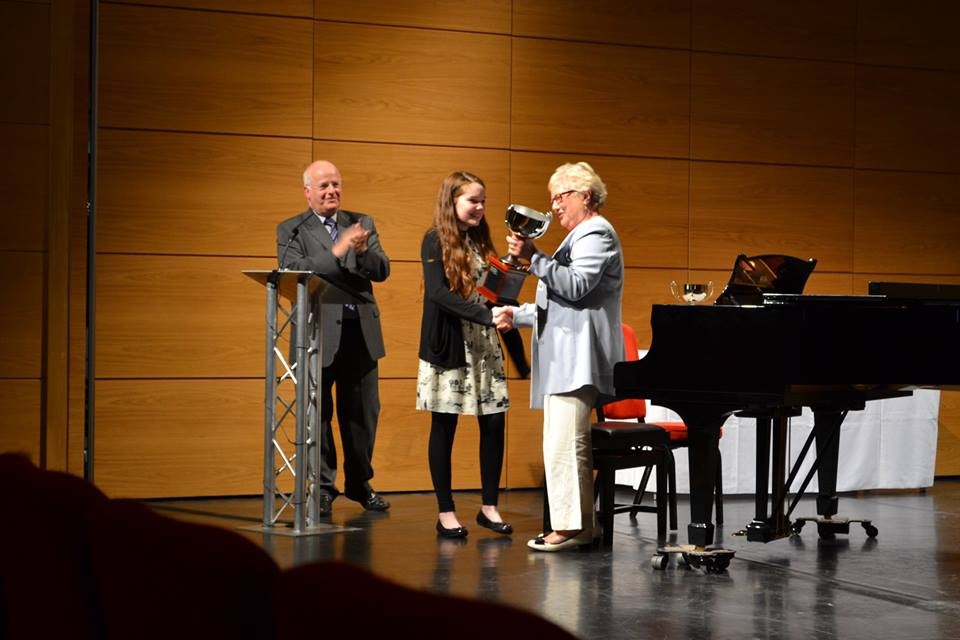 Erin who also receives piano lessons at the Music Centre with Teleri-Siân, and clarinet lessons in school with Dave Hopkins was surprised on the day of the concert to learn that she had received the best result in the exams:

‘I had no idea until they called my name for the prize that I had won the cup. The Music Centre had only told me that I would be performing on the day only – it was big a surprise to hear my name being called out!’

Ann Atkinson, Erin’s singing tutor was delighted by the result. ‘Erin has worked very hard during the year – it is a joy to teach her, and I’m very pleased that her hard work has been rewarded. I’m now looking forward to going forward with Erin to learn new repertoire and prepare for her grade 4 exam.’

The Music Centre recently celebrated its 15th anniversary and it is only recently in 2012 started to provide music tuition in Denbigh with the provision of projects such as Camau Cerdd (Steps in Music) for young children, and a newly formed harp group, Telynau Clwyd, and theory lessons being offered in Denbigh for the very first time in October.

A concert was held on Friday the 18th of September by Canolfan Gerdd William Mathias Music Centre at Galeri Caernarfon to recognise the achievements of the Music Centre’s students during the previous academic year.

Amongst the students who performed and received awards was Erin Swyn Williams from Llannefydd who has been receiving lessons with Ann Atkinson at the Denbigh Branch of Canolfan Gerdd William Mathias Music Centre for several years.

Erin, a pupil at Ysgol Glan Clwyd, was awarded the prestigious Thomas William Jones memorial Cup which is presented annually to the Music Centre student who achieves the highest mark in a grade 1-5 practical exam. Erin recently achieved 142 marks out of 150 in her grade 3 singing exam and therefore was a very worthy winner of the cup which is presented by Caernarfon Male Voice Choir in memory of a former choir member.